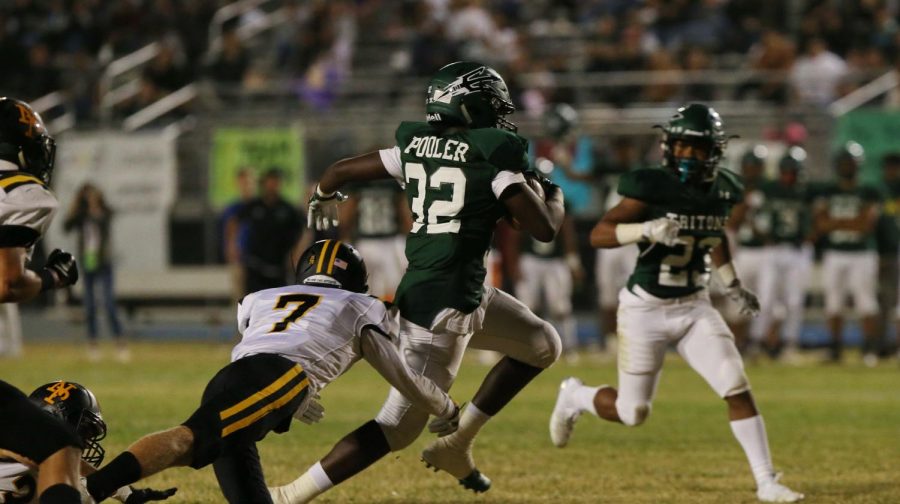 To say that our recent football season was great is an understatement. The improvement of last year’s 2-9 ratio to an extraordinary 11-2 win/loss scale is nothing short of phenomenal. Among this year’s feats was the making of sports history for Pacifica in two specific categories: winning 10 games in the season and making it to semifinals for the first time.

After dominating the field at home for nine games, our boys were given the amazing opportunity to play in CIF for the Division 6 Championship. With all the support and confidence radiating, the championship title was within our Tritons’ reach.

On November 2, the boys played home against the Fullerton Indians at Ventura College, where the Tritons would continue to play throughout playoffs due to unsafe grounding. Despite the seemingly far location, our spirit carried through the next town over as many students and staff were there to support the boys. Fullerton proved no match for our Tritons as we dominated them with a score of 58-0. A student at the game, who wishes to remain anonymous, stated, “I’ve never seen a beatdown given like that by Pacifica. It was crazy.”

Moving towards the quarterfinals, the boys were ready to play Mayfair, the same school that had previously beaten them last year in CIF. This year, our Tritons were ready to give them their all, determined to claim revenge on the field. Their rage was put on hold, however, as the southern California fires rampaged close to home. The original date and location had been postponed to Saturday, November 10 at Ventura High School. The sudden change of events didn’t seem to faze the team, as they put in the best of their efforts against the Mayfair Monsoons, enough to send them into overtime. With the game leading down to one field goal, kicker Scooter Carranza landed it, granting Pacifica the opportunity to enter semifinals for the first time in school history.

With the feeling of finals within reach, our Tritons gave it their all in preparation for their biggest game yet. The following Friday, the boys made the long ride to West Covina for a showdown against South Hills High School. Many students and faculty turned out for support, carrying Triton pride counties over from home. Despite all efforts, Pacifica lost to South Hills with the final score of 20-13.

It was a bittersweet moment, having made it so far in the season, but knowing that this year’s team made a permanent mark on Triton football is an achievement many staff members and students will remember throughout high school.